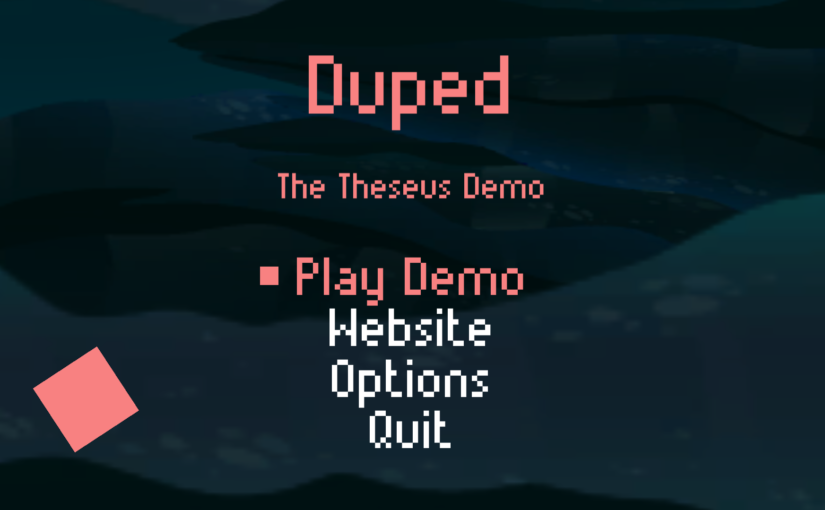 So, Duped is fast approaching release! In fact, we’re only about a month out from the actual, factual release of my first commercially available game. 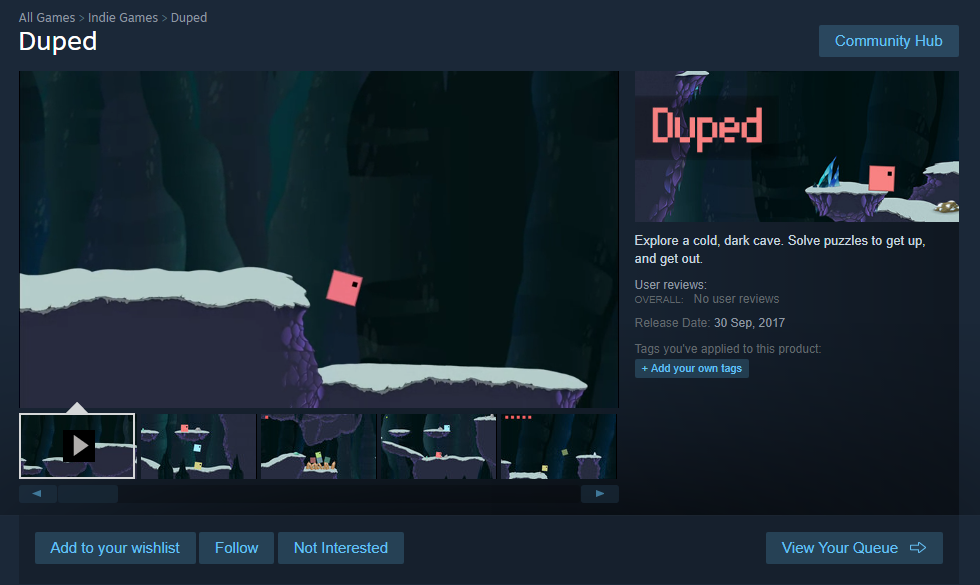 Fun times! So – one of the things that I haven’t really been thinking about that much is Marketing. It’s capitalised there, because that’s how I see it. Marketing. It’s an opaque entity that determines whether this game that I’ve poured so much of my time and soul into will be successful or not. Despite the research into how to do it, I still do see it in part as a final boss to defeat.

It’s scary. So, I’ve been brainstorming ways to take chunks out of it, piece at a time. The one I’ve been working on for the past week or so is a demo. It’s a pretty obvious tactic, give a chunk of the game out for free, so that players can evaluate it for themselves.

So, let’s break this down. Problems, and solutions. Here are the problems:

Above you can see the first level of my solution. It’s called Duped: The Theseus Demo. It’s 9 levels. 3 new levels, and 6 “reskins” of levels from the same game. Let’s talk about how I came up with it, and how it solves the problems I mentioned above.

The most important thing to me about building this demo was that it was representative of the themes of Duped. The main ones, to me, are isolation, identity and forming attachments. While these are subtler in the main game, I wanted the demo to address these head on. So, I built the demo around an old thought experiment called The Ship of Theseus (also known as the Grandfather’s Axe). If you’re unfamiliar, you can check it out here.

So, obviously the themes overlap. Duped is all about identity, cloning and replacement, as is the Ship of Theseus. So, I decided to base my demo around this thought experiment. I do that old thing of building levels out of text, where the text of the levels is the text of the thought experiment. A bit indie, and a bit generic, but it helps get the themes across and gives The Theseus Demo an interesting style.

So, how does this solve the problems:

Even if players don’t read the text, the final sentence (or even the emphasised final word) gives players all they need to know about the themes. You’re replacing yourself, and soon no original parts will remain.

To emphasise this, the final level of the demo forces you to make a choice.

Which one is the Theseus?

You are forced to choose one clone to be the “real” one. It’s essentially a meaningless choice, as neither of the clones you have with you at the moment are the ones you started with, but it does force you to consider the core theme of Duped. You’re making clones. You don’t have an individual identity, and if you ever did, you left it behind a few levels ago.

So, thats the Theseus Demo. It ends with a quick look at the platforms (with screenshots of the game in motion), and then lets you exit & takes you to the website (where you’ll be able to buy the full game).

I thought it was a pretty neat way to solve some problems that are faced around demo creation, while still building the actual demo fairly quickly (around 2 solid days of work in total).

Stay tuned, because the steam page for Duped is coming soon!

One thought on “Introducing Duped: The Theseus Demo”