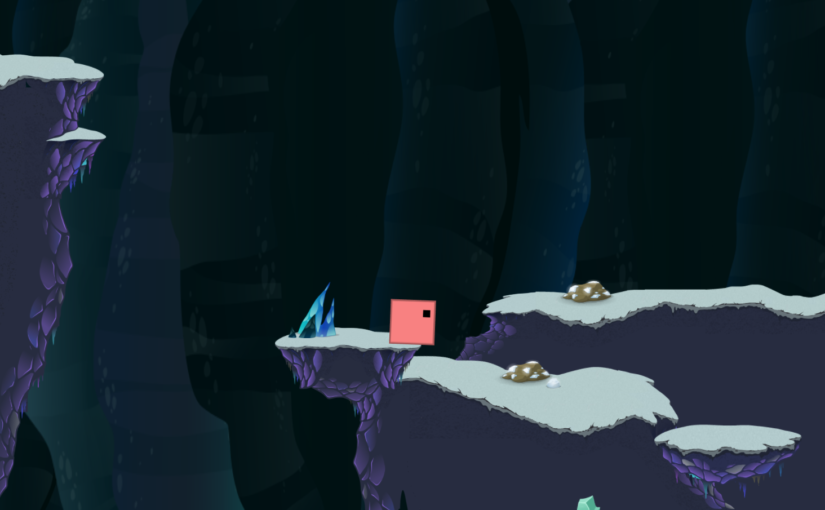 I’m not an artist. Anybody looking at Duped can easily tell that. Most of the art is taken from a game called Glitch, which was abandoned and its assets made public domain back in 2012. I’ve long been resigned to the fact that I’m not going to be able to make Duped as beautiful looking a game as I want to. Because of that, I’ve had to work on making Duped differentiate in a different way. I’ve put a lot of time into polishing the very basic interactions of this game to make them feel as fun as I can. I’ve done this in a number of places – menus, switches, enemy interactions – but the one I’m most proud of is the player movement.

However, the drawback with this is a lot of the fun in the game comes from the freedom of solving puzzles by creating clones how you want to. This means that I really had to put in a lot of effort to make the game feel fun to play, even when you’re just walking and jumping.

The first way I did this was by building around the physics system of the game. A platformer like this doesn’t need to be physics based, but by doing so it makes the game feel more “real” to play. All the small interactions when your player is jumping and moving cause them to actually get jostled around a little bit, which is fun! You want your cube to tilt and spin as you’re moving through the levels, and this is very intentional.

In the gif above you can see the player just moving forward and jumping. There aren’t any complicated sequences of jumps to pull off here, but the player still spins and tilts as they move. I’ve added code which makes the player tilt a little when they jump while moving, and almost all of the platforms in the game have slightly uneven colliders.

To emphasise this, as much as possible I try and use “staircase” configurations of platforms instead of ramps. This means that you have a much higher chance of colliding slightly with the edge of a platform, jostling you (or even more fun, you almost don’t make it onto the platform and have to slide up the side of it a bit to get on!).

I know I’m drilling down pretty deep into some minute details here, but this is stuff that I’m really proud of having implemented in the game. Making Duped fun to play is one of the biggest polish aspects that I have been working on, and it makes me really happy when people lose themselves for a moment just jumping around. It makes me feel like I’ve succeeded as a game developer when people want to get lost in waving their mouse quickly over the menu for a few seconds, or just running back and forward and jumping. People are never going to remember “oh walking felt really fun in Duped”, but maybe they’ll have a better experience with the game overall, and that’s what it’s all about, isn’t it?

One thought on “Maximising the Fun in Mundane Interactions”